It was a horrifying scene yesterday afternoon in Port Harcourt, as policemen attached to Governor Nyesom Wike and that of the Transportation Minister, Rotimi Amaechi, clashed along the Elekahia-Nkpogu road. 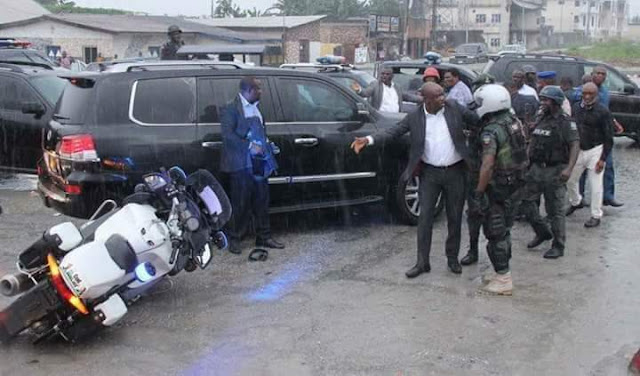 Amaechi’s escort details were, however, unlucky during the 3p.m. attack, as one of them, Sgt. Eteng Ewelu, was battered, with blood on his face, while the AK-47 rifle of Sgt. Princewill Ubaji was snatched, while being forcibly disarmed, with the rifle taken away by the Rivers Governor’s convoy. An action being criticized in wide circles. Wike, through his Special Assistant on Electronic Media, Simeon Nwakaudu, in his reaction, however, claimed that personnel of the Federal Special Anti-Robbery Squad (F-SARS) and soldiers attached to the minister of transportation attacked his convoy, while allegedly attempting to assassinate him.

But in a statement signed by the Chibuike Rotimi Amaechi Media Office, the Minister disclosed thus, “In a blatant show of naked raw power, Minister of Transportation, this afternoon narrowly escaped being shot by security men attached to the Governor of Rivers State, Nyesom Wike. His car was vandalized with a broken side mirror. Report of the sad incident has been lodged at the State Criminal Investigation Department (SCID) of the Rivers Police Command, headed by Zaki Ahmed, while Ubaji’s rifle had not been recovered, with Ewelu and other injured policemen still receiving treatment in undisclosed hospitals in Port Harcourt, as at press time.

The Transportation Minister, who was driving from the Port Harcourt International Airport, Omagwa, in company with police escorts, got his convoy intercepted by the Rivers governor (Wike) at Trans-Amadi Industrial Layout by Nkpogu in Port Harcourt. The security details managed to ferry Chibuike Rotimi Amaechi to safety, after which the Rivers governor led his Chief Security Officer (CSO), Promise Wosu, a Superintendent of Police (SP), and about ten mobile policemen, to attack his predecessor/benefactor’s convoy.

“The Rivers governor and his troops physically assaulted by slapping and bruising the policemen, especially Inspector Johnson Imonikhe, Sgt. Eteng Ewelu and Sgt. Princewill Ubaji, attached to the transportation minister and the governor made away with the AK-47 rifle of Sgt. Princewill Ubaji, one of the policemen attached to the transportation minister. “The AK-47 rifle was forcibly taken away personally by Governor Wike, who was accompanied by his CSO. The policeman with blood on his face, Sgt. Eteng Ewelu, was hit with an iron by Wosu (Wike’s CSO), in the presence of the Rivers State Governor. “The snatched AK-47 rifle is still in the custody of the Rivers Governor’s team and the incident has been referred to State CID (SCID) for investigation.”

Nwakaudu in a statement said: “Rivers State Governor, Nyesom Ezenwo Wike, on Saturday escaped assassination, as Special Anti-Robbery Squad operatives and soldiers of the Nigerian Army in the motorcade of the Minister of Transportation, Rotimi Chibuike Amaechi, attacked his convoy. “The Governor, who was on project inspection, was attacked at Nwanja Junction on Trans-Amadi Road. The SARs personnel and soldiers in the minister’s convoy hit down the Governor’s escort rider and attacked the policemen in the pilot car. Mr Debewari, Aide-de-Camp (ADC) to the minister of transportation, supervised the attack, which included damage of cameras held by journalists. “Also part of the attack was the Commander of F-SARS in Rivers State, Mr. Akin Fakorede (a Chief Superintendent of Police), who received the minister of transportation at the Port Harcourt International Airport and accompanied him on his trip.”

The minister’s media office said the incident which occurred along Trans-Amadi Road, Nwaja axis involved cars of many of Amaechi’s supporters while the Minister’s black jeep was intercepted and blocked at the junction by the security motorcycle outrider attached to Wike after two cars had passed through. The statement added, “One of the two cars had security men assigned to protect the minister in Port Harcourt. Suddenly, gun-toting security men attached to Wike’s convoy surrounded the Minister’s car, threatening to shoot him. They hit the car, tried to smash the windscreens, back and side windows and broke a side mirror. All through this attack, Amaechi remained calm, inside the fortified Jeep.” It added that the Minister eventually passed through after the intervention of the security team on ground to protect him in Port Harcourt. It continued, “However, when Governor Wike got to the point where the incident occurred after Amaechi’s vehicle had gone by, his security men blocked the road again, dragged out from a vehicle and thoroughly beat up a police man attached to protect Amaechi in Port Harcourt. The Policeman’s riffle was also taken from him.”

The Amaechi media office added that Wike came out of his car, and with his security team went from one vehicle to another of Amaechi’s supporters charging at them, harassing and abusing them. It alleged that Wike’s security men were heard loudly insulting Amaechi and calling him derogative names.

It started when the dispatch rider preceding the motorcade of the Rivers State Governor collided with Rt. Hon. Chibuike Rotimi Amaechi’s vehicle. The bike skidded off its lane into Amaechi’s motorcade and the security personnel attached to the Minister stopped and his outriders ensured that the motorcade was not hampered. The Governor’s dispatch rider was allowed to continue although he refused, and the minister who was the driver of the third car in the group zoomed off sensing the mild drama likely to play out and a sinister assassination plot.
Arriving at the scene minutes later, the Governor ensured that the rest of the Minister’s motorcade was impeded. He barricaded the lane with his car and in a commando style searched all vehicles; flinging the doors of the cars open. By this time, the Minister and couple of cars on his motorcade had left. In an attempt to calm tension, a certain brave officer of the police decided to explain the situation to the raging Governor. An enraged Governor Wike screamed, abused and instructed his detail to beat the police office and his gun confiscated. 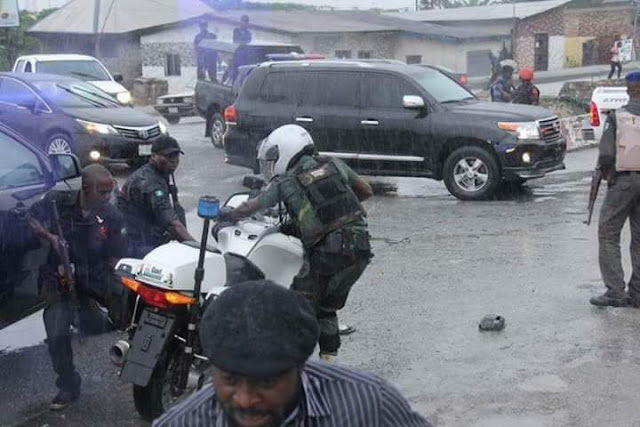 According to Prince Tonye Princewill, “If a dispatch rider is the first vehicle in a Governor’s convoy, what is it doing interrupting the third vehicle in a much shorter convoy? You can see Debowari moving the man away after he angrily pulled his gun on the Minister. Two of the Minister’s vehicles had passed. Amaechi was about to pass when this bike guy emerged and tried to stop us. Amaechi avoided him and tried to carry on but the dispatch rider refused, he instead came off his bike and tried to break Amaechi’s bullet proof windscreen. Seemingly frustrated that there was no damage, he then smashed his side mirror and went round to Amaechi’s window and pulled his pistol.

What happened could be blamed on the Governor’s outrider’s carefreeness but Governor Wike took undue advantage of the situation to deal some deadly blows on Federal SARS. The Governor’s Media Aide’s Press Statement that was released almost immediately in which the integrity-bereft aide twisted the incident is nothing but sheer balderdash.

From a distance, going through the pictures and videos in the public arising from the incident, there are a few questions and observations that could inform an unbiased mind and call to reason.

In all the pictures/video, whose convoy is seen visibly? Whose aide was the fully dressed man with helmet and leading the attack? In the video, whose security attachment was chased, wounded and disarmed?

The only convoy at the Nkopgu junction as evidently seen was the Minister’s convoy. The aide fully dressed on was Governor Wike’s dispatch rider. He was running to attack the black SUV when he noticed it was Amaechi he had collided with. The man on white shirt and suit is Amaechi’s aide, Debuwari. Debuwari was pleading to the outrider not to continue his attack on the SUV which Amaechi was riding in. Finally, Wike’s men chased, injured and disarmed SARS officials attached to the Minister, on the orders of Wike. 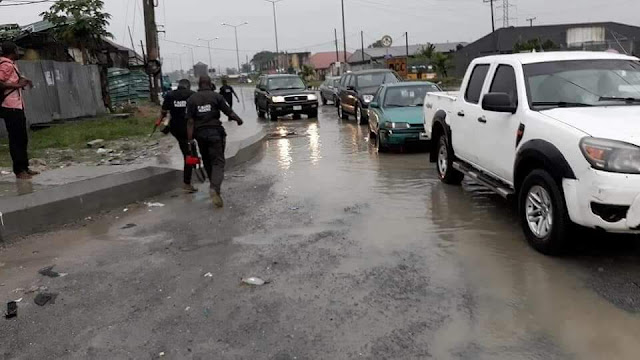 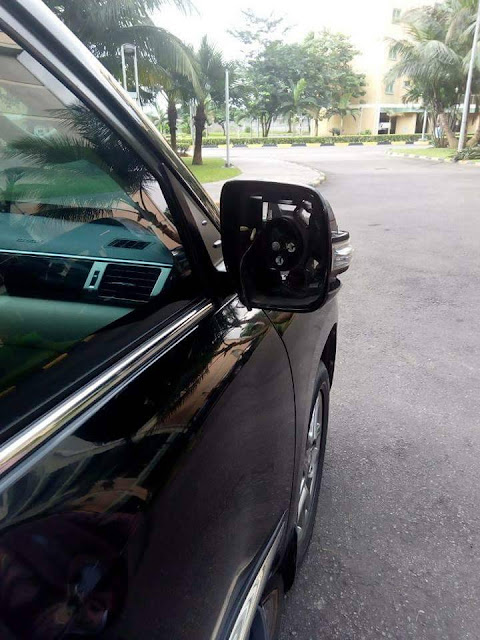 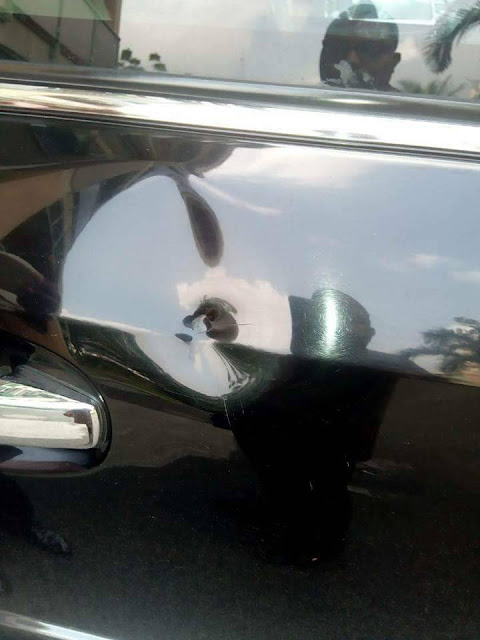