Apr 28, 2016 | Lawban Reports | Politics
Rivers State Government has assured of its preparedness to collaborate with the federal government in the implementation of the United Nations Environmental Programme (UNEP), report in the clean-up of Ogoni land environment devastated by oil pollution.
The State Governor, Chief Nyesom Wike gave the assurance Thursday, when the Minister of Environment paid him a courtesy call at Government House, Port Harcourt.
Chief Wike who was represented by his Deputy Dr. (Mrs) Ipalibo Harry Banigo expressed happiness with the commitment of the Federal Government in the implementation of the UNEP report, noting that the devastation of the Niger Delta environment has impacted negatively on the people.
“As a State, we strongly reiterate our support towards the holistic Implementation of the UNEP Report on Ogoniland. We are excited to see the drive of the Minister for Environment in ensuring that the Ogoni clean-up exercise becomes a reality.” The Governor stated.
He expressed the readiness of the Ogoni people and indeed the State to cooperate and collaborate to see the successful conclusion of the clean-up exercise in accordance with internationally acceptable standards to enable the people return back to their farm lands.
The Governor said his administration is determined to do all within its powers to provide a people oriented governance while efforts are on to restore the garden city status of Port Harcourt.
Earlier, the Minister for Environment, Mrs. Amina Muhammed who was represented by the Minister of State for Environment, Alhaji Ibrahim Usman Jubril, said they were in the State to seek collaboration and cooperation with the State Government and Ogoni Stakeholders in the implementation of the UNEP report.
The Minister noted that the programme which is expected to be launched on the 2nd of June this year, is to be driven by all Stakeholders in the region and will ensure that the people benefit from it.
She thanked the State Government for the warm reception accorded them, stressing that it was an indication that the Federal Government can partner with the State in several areas.
Paul Damgbor
Press Secretary to the Deputy Governor
Thursday, April 28, 2016. 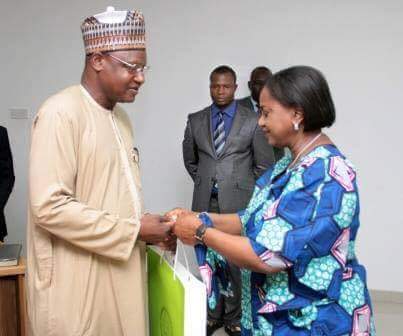